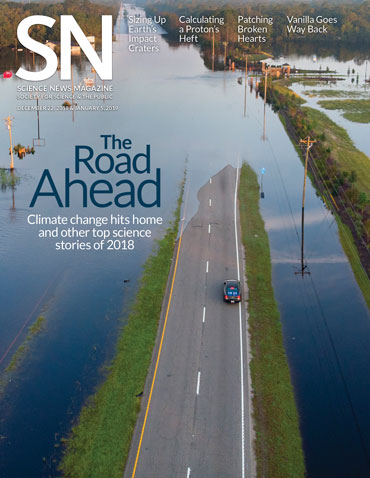 Online reader greg found the term “artificial intelligence” misleading. “In reality what we call AI are merely classification algorithms,” greg wrote. “True AI may well never exist, we don’t have the first clue how to do it.”

Temming acknowledges that the term might give people the wrong idea about what computers are actually doing. “Certainly AI algorithms don’t think like humans do,” she says. “But you also might be conflating two different levels of artificial intelligence.”

Artificial narrow intelligence is the AI that exists now. These systems are designed to mimic specific feats of human intelligence such as image recognition and game strategizing. “An A-list AI example would be AlphaGo, which is extremely good at the hardest board game ever, but nothing else,” Temming says. The second kind of AI is artificial general intelligence. “That AI would be able to solve any problem with human-level intelligence. We’re not there yet.”

Adult female mosquitoes may be surfing air currents above West Africa, Susan Milius reported in “Mosquitoes may surf winds above Africa more than we realized” (SN: 12/22/18 & 1/5/19, p. 13). For reader Keith Graham, the story brought to mind Toto’s 1982 hit song “Africa.” On Facebook he wrote: “They surf the winds doooowwwnn in Aaaaaafriiica.”

Reader Leslie Hruby suggested that Science News’ 2019 space missions recap include coverage of New Horizons’ flyby of the Kuiper Belt object nicknamed Ultima Thule. “So excited to learn more about these small worlds orbiting in our solar system (and how to pronounce them). Asteroids, dwarf planet, distant object, Oh my!” Hruby wrote.

We have it covered, Grossman says. She reported on New Horizons’ New Year’s Day flyby of Ultima Thule (pronounced TOO-lee, or THOO-lee, depending on whom you ask). “One exciting finding is that the space rock is shaped like a snowman,” she says. The shape is the result of small rocks glomming together to form larger rocks (SN: 2/2/19, p. 7). If Science News does a 2019 mission recap, New Horizons will surely make the list.

The story got readers’ creativity flowing. Many sent in poems about the research.

Reader Tom Torkildson wrote: “Of all the many dainty species / only wombats shape their feces / Six-sided solids are what they pass / I wonder, can they sculpt their gas?”

On Twitter, @cuttlefishpoet penned a limerick: “So you’re saying that wombats poop cubes / ’Cos their guts are elasticized tubes / Which take fiber-filled diet / And process and dry it / For stacking? C’mon — are we rubes?”

Science News alumni even got in on the fun. Former intern Leah Rosenbaum wrote: “They’ve never heard of Picasso / Braque, Léger or Cézanne / They don’t sit at cafés drinking espresso / And they find canvases quite bland / If you gave them a paintbrush or palette / They wouldn’t even need to use it / For them it’s innate, it’s a habit /Wombats are the original cubists.”